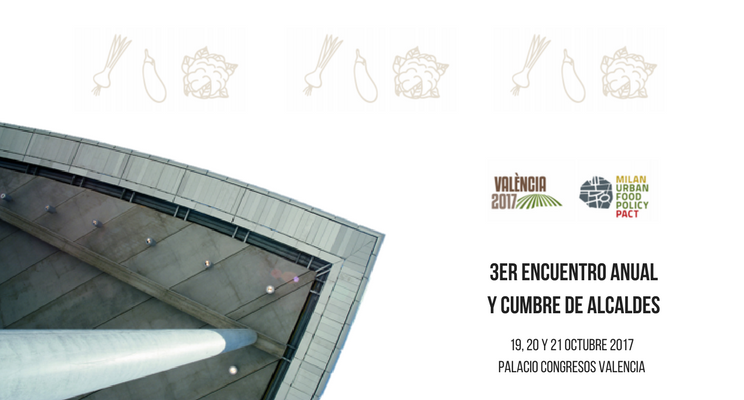 The most important international event for cities concerning sustainable food will start: between 19 and 21 October 2017. About 400 delegates, experts and Mayors from 100 cities and 50 countries will gather at the Conference Center in València to strengthen the dialogue between cities, territories, national governments and international organizations on sustainable food systems linking urban and rural areas around the world.

The initiative goes back to the Milan Urban Food Policy Pact (MUFPP) which was launched by the City of Milan on the occasion of the Expo 2015 and is actively supported by FAO (the Food and Agriculture Organization of the United Nations). So far, 159 cities worldwide have signed the Pact and numerous cities from Spain or abroad are planning to join the Pact during this week’s event.

Confirmed participants include among others the Mayors of València, Barcelona, Copenhagen, Milán, Nuakchott, New Delhi South, West Sacramento and Zaragoza as well as renowned experts such as Graziano da Silvia (Director General, FAO), Edward S. Rubin (coordinator of the IPCC Report 2005/winner of the Nobel Prize for Peace), Gary Gardner (Worldwatch Institute Washington) and human-rights activist Bineta Diop from Senegal. Livestreaming will be provided throughout the whole event following this link:

The event will start off with different technical meetings and working sessions organized by and with the participation of the Secretariat of the Milan Pact, FAO, UN Habitat and diverse city networks such as Eurocities or RUAF. Topics for the debate include the role of cities in orienting sustainable food systems, the way how food system governance systems contribute to the implementation of international framework protocols such as the Sustainable
Development Goals or the New Urban Agenda.

One of the most important highlights of these three intensive days of exchanges and discussions will be the reading out of the València Appeal on Friday noon – a call for action directed at cities and international stakeholders to
support sustainable food systems and contribute to the implementation of the Sustainable Development Goals of the 2030 Agenda for Sustainable Development, the Paris Agreement to combat climate change or the New Urban Agenda adopted by UN Member States in October 2016.